In our Lausanne clinic we have a lot of experience in the field of buttock lipofilling, also known as buttock augmentation with fat or Brazilian buttock lift – BBL. The buttocks are one of the most important attributes of a woman’s beauty. However, many women are not satisfied with the volume of their buttocks and desire more volume. Good candidates for a lipostructure of the buttocks are those who have adequate fat reserves. The procedure leaves only small scars.

An example of lipofilling of the buttocks and hip dips with injection of 750 cc. of fat per buttock

The main features of the EVL include the use of a curved, vibrating cannula that forms a gap when the grease is injected. This allows larger amounts of grease to be transferred more precisely than with a syringe. The larger diameter of the cannula makes it less likely to puncture a vein or vessel. The curved cannula can be rotated to increase its effectiveness.

This revolutionary procedure provides a firm and muscular appearance and excellent fat grafting. In addition, up to 30% more fat can be injected in the same session.

With EVL technology, your security is basically guaranteed.

Hip dimple is a newer term that refers to the dent that is sometimes seen on the outside of the buttocks. They are also called "injured hips", the scientific term is "trochanteric depressions".

These depressions cannot be "corrected" by simply exercising the gluteal muscles and trying to strengthen the thighs or buttocks. Hip depressions are either a hereditary phenomenon that cannot be changed, or a phenomenon caused by excess fat. In the latter case, diet and/or exercise can sometimes help reduce the appearance of hip lows. However, even if you lose weight in this area, the overall shape will usually remain the same, meaning you will still have a dip after losing weight.

To correct hip dimpling, we can perform lipofilling in this area: Liposuction removes fat from another part of the body - usually the hips, abdomen or riding breeches - and fat grafting places the fat in the buttocks.

The correction of hip dimpling is not necessarily accompanied by an increase in the posterior volume of the buttocks, as in the following example.

An example of hip dips correction without increasing the posterior buttock volume using 250 ml of fat per buttock.

The different shapes of the buttocks through lipofilling

There are - as you can see in the attached picture - 4 buttock shapes: Shape A, C, H, V. Depending on the basic characteristics of the patient's buttocks, Dr. Favre will approach the desired buttock shape. Some shapes are statistically considered more attractive. We will explain to the patient what is possible in her particular case. 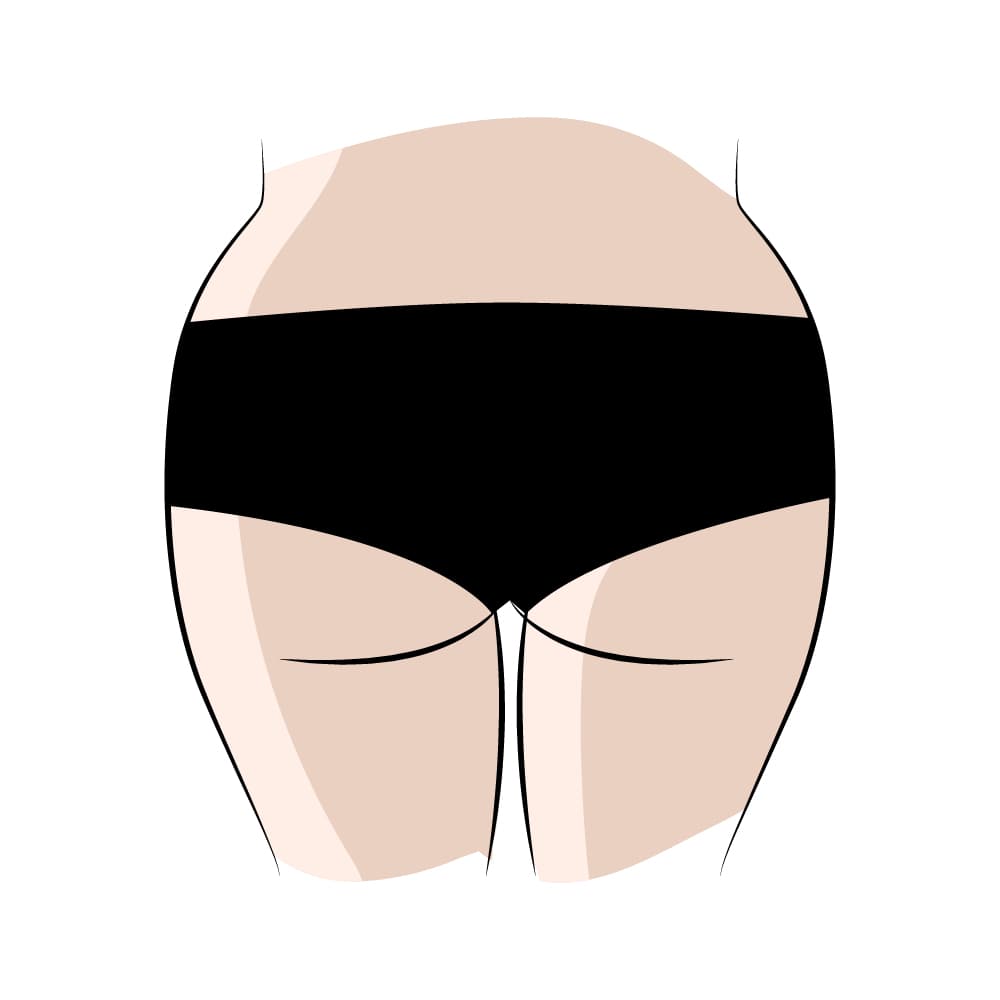 This shape is feminine, but is usually less in demand than the C-shape. 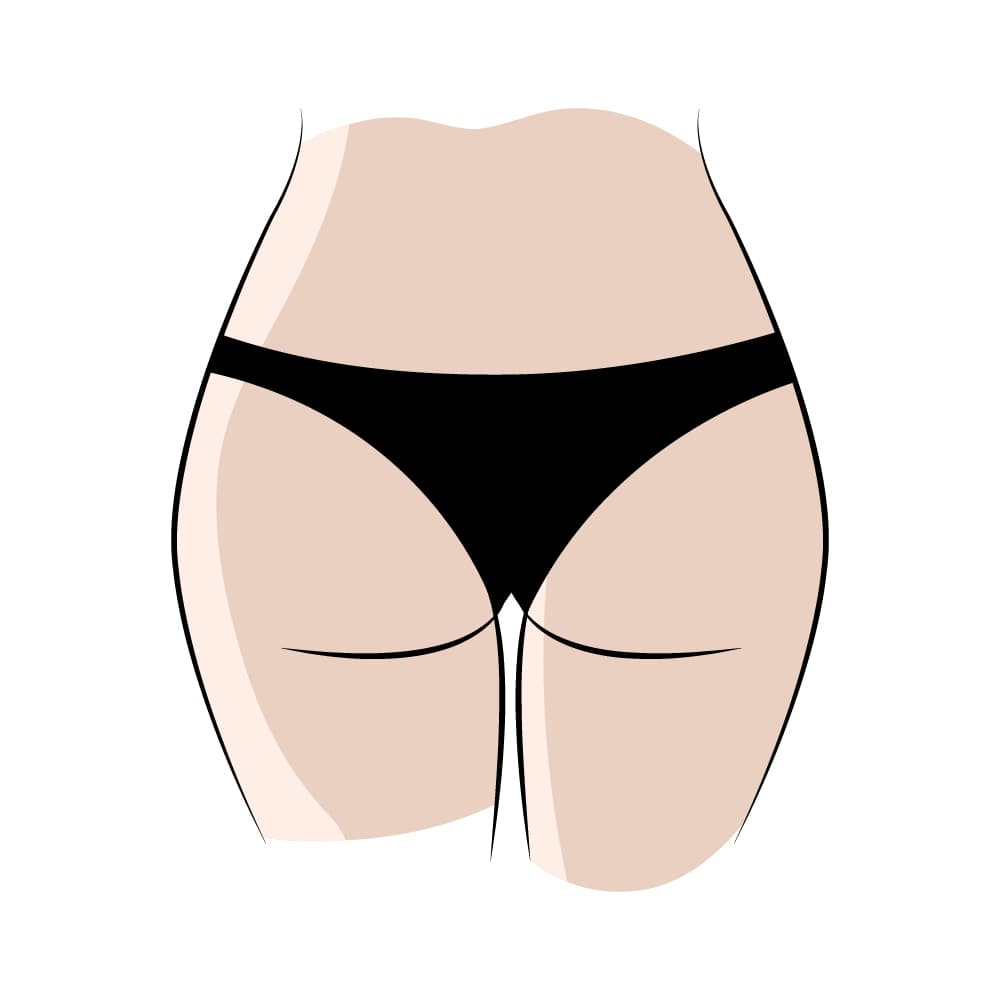 The round buttock is very feminine. This is the shape most often desired by patients. 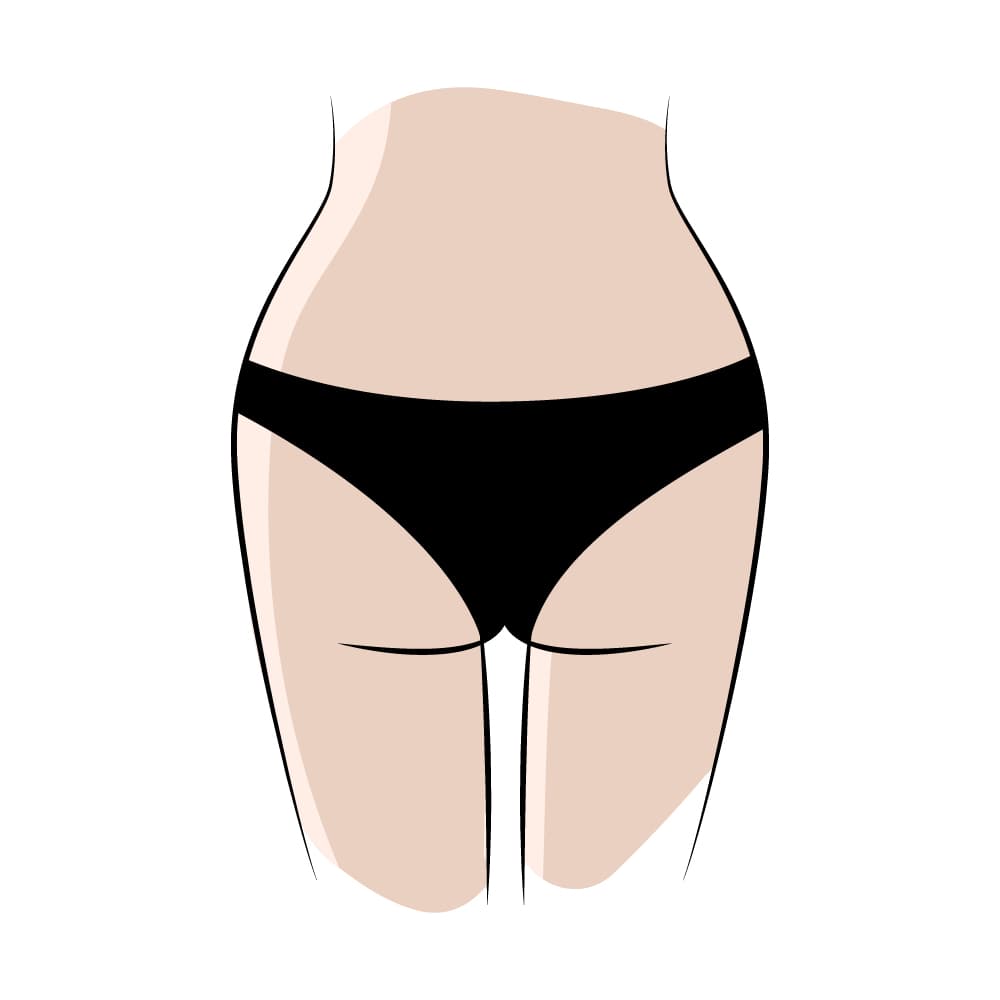 This is the masculine form of the right buttock. 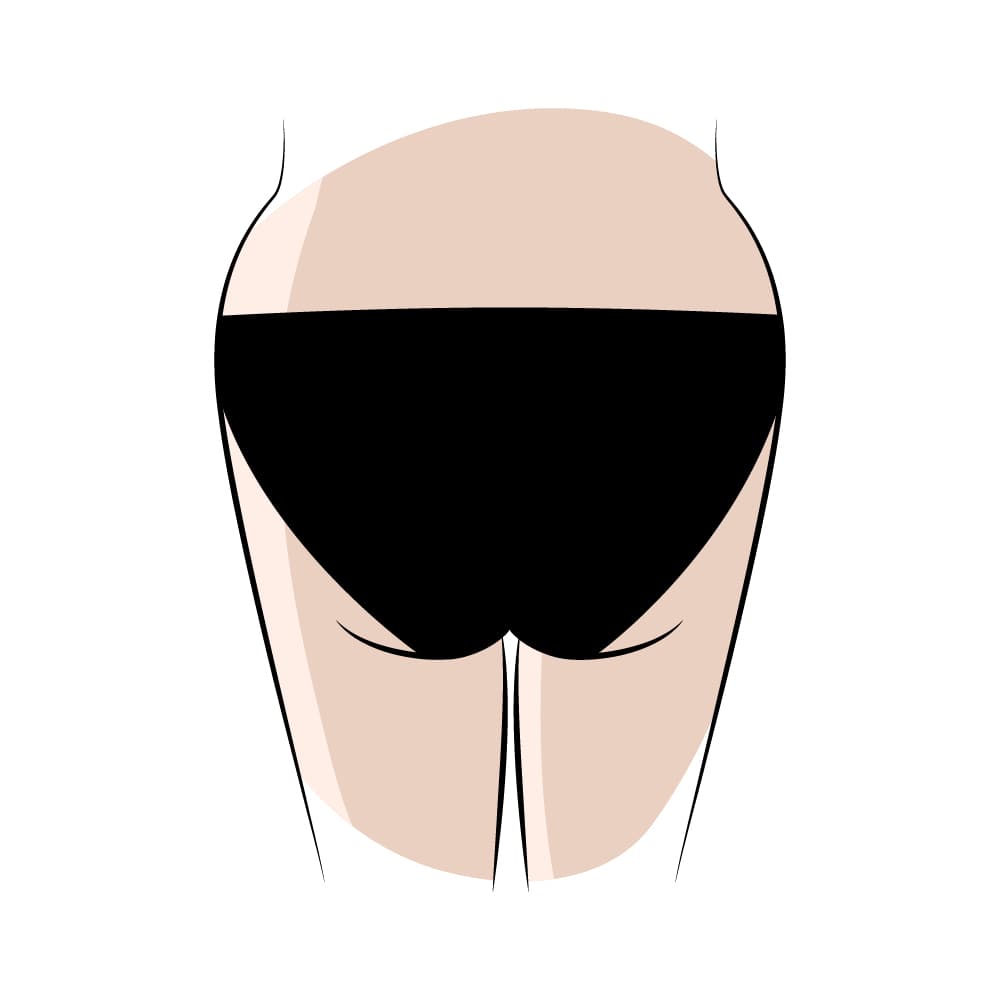 This is the least attractive buttock shape. It is the most difficult form of the buttocks to treat. 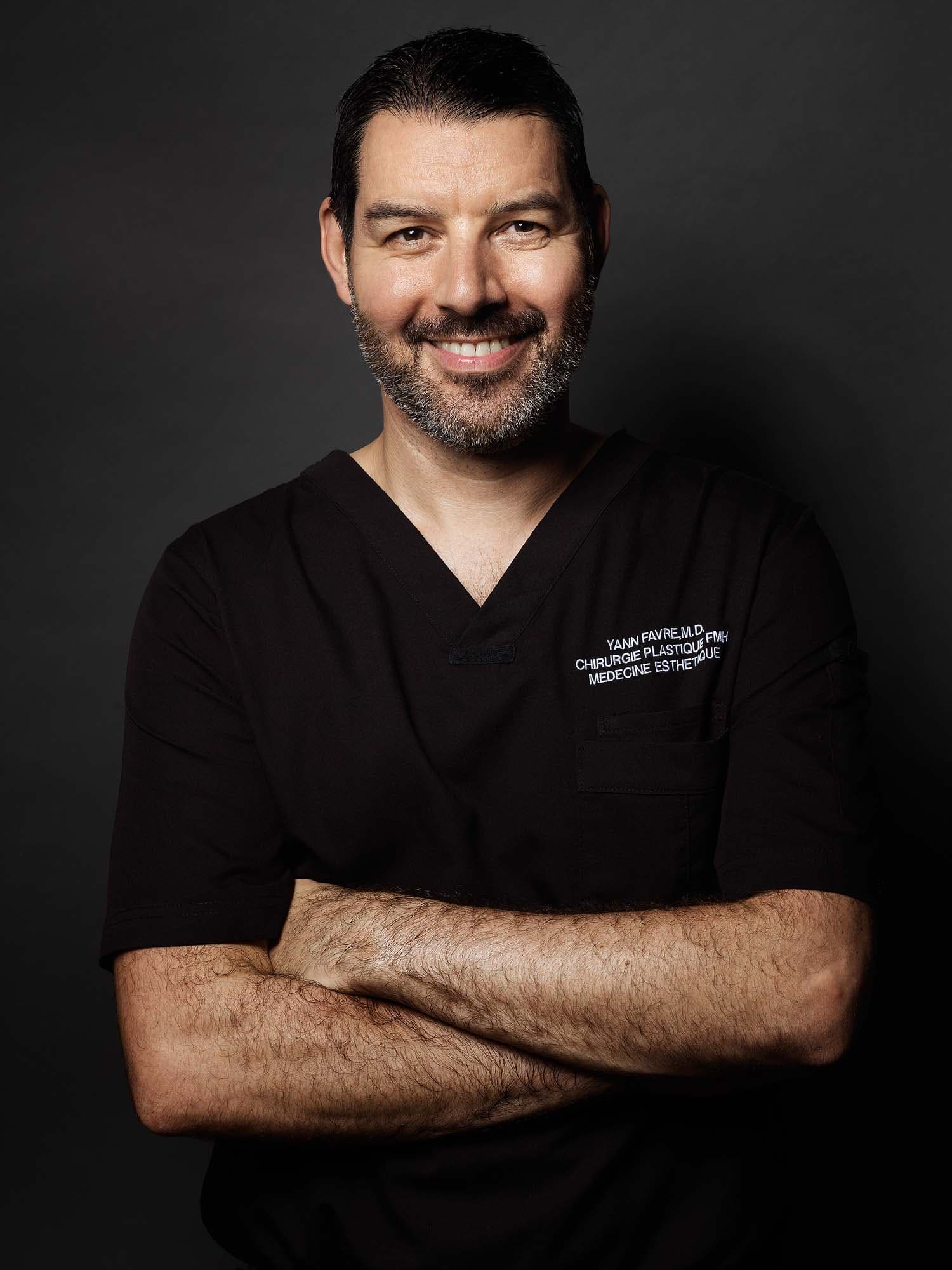 Professional consultation with a qualified specialist in plastic surgery FMH & EBOPRAS
Member of the Swiss Society for Plastic and Aesthetic Surgery
More than 15 years experience in plastic and aesthetic surgery in various clinics and university hospitals in Switzerland and Europe
15 to 20 liposuctions per month.
Expertise in HD liposuction, buttock and breast lipofilling
Individual result planning
Postoperative medication and Panthy Marena © included
A professional and friendly team that cares for your well-being before, during and after the operation
Yann Favre, MD
Founder of the Bellefontaine Clinic
Specialist FMH & EBOPRAS Plastic, Reconstructive and Aesthetic Surgery

Lipofilling of the buttocks is a technique for buttock augmentation by injection of autologous fat that has many advantages over a simple buttock implant. It not only increases the volume but also modifies the contours of the buttocks and tightens the sagging buttocks to make them more beautiful. Lipofilling produces a more natural result than buttock implants. The buttocks are basically an ideal recipient area for fat augmentation because of its good blood circulation. If the buttocks are large or if the skin is very loose, 300 to 350 ml of fat per buttock may be required. Depending on the individual taste and the basic morphology of the patient, we try to reproduce the desired buttock type. It is certainly difficult to achieve exactly what a patient wants if her basic morphology makes this difficult. However, this will be clearly explained to you during the consultation to avoid disappointment. Not all lipofillings are the same. We use the German WAL Bodyjet® technique, specially developed for lipofilling with innovative instruments to reduce the resorption of the fat injected into the buttocks as much as possible and to achieve the best aesthetic result. To this end, we perform liposuction at low pressure and work in a closed circuit to avoid deterioration due to contact with air. The liposuction and injection system is therefore perfectly coordinated. The fat obtained by this method is sieved and washed and can then be used for buttock augmentation. During the procedure, between 50 and 80% of the fat cells survive. The scars are almost invisible and less than 4 mm long. You are a good candidate for buttock lipofilling if: - You have adequate fat reserves in the hips and other areas for lipofilling - You are a non-smoker - You have a stable weight. - You lead a generally healthy lifestyle and are in good health

During the first consultation we make sure that lipofilling of the buttocks is a good indication for you. For this purpose we clarify questions about your general health. We measure your body weight, height, fat percentage and the thickness of the subcutaneous fat layer. The areas to be treated are drawn and discussed with you in front of the mirror. We discuss the small incisions required and the technique we will use. A blood test will be required prior to the procedure. If liposuction of the abdomen is desired, an ultrasound scan for hernias will be systematically performed. It is recommended to stop smoking 3 weeks before and 3 weeks after the surgery.

In order to achieve a harmonious and natural result, the problem areas are marked in the standing position. While lying down, the surgical area is disinfected and sterilely covered. Through very small skin incisions of only 3 to 4 millimeters, a tumescent solution is then introduced into the marked areas. It contains painkillers and medication to alleviate the resulting bruising. Depending on the surface and height of the layer, different suction cannulas are used. In order to achieve an optimal result, several intraoperative controls are performed in the standing position. The fat is then prepared and injected into the buttocks under deep sedation or general anaesthesia. Immediately after the buttock lipostructure, the patient is fitted with an appropriate dressing and compression belt to aid in the skin adjustment process. The operation is usually performed on an outpatient basis and takes three to four hours.

After lipostructuring of the buttocks, some volume loss must be expected, as not all fat cells will survive after transplantation into the tissue. Therefore, patients should use a special BBL cushion for sitting to achieve an ideal result. After lipostructuring of the buttocks, you need to take antibiotics for three days. In order to avoid irregularities, one week after the procedure, treatment with LPG Endermologie is strongly recommended in the areas where liposuction was performed. It is essential to wear the compression bodice regularly. For three weeks it becomes a companion - day and night - and is only removed for showering. Any swelling and bruising will disappear after a few days. After two to three days of rest, social life can be resumed. Sports are possible again after three weeks. A stable weight is an important component for an optimal final result. A good result is visible 4 weeks after the operation, but the final result can only be assessed 6 months after the operation.

In areas where liposuction has been performed, the sensitivity of the skin to touch may be slightly reduced. Sensitivity returns in the weeks following the procedure. Bruising, redness and slight swelling occur regularly after the operation. These disappear after a few days or weeks. Infection, local hematoma, and induration may also occur, but are rare. Slight bumps and asymmetries are also possible. Because we check the standing position regularly during surgery, the risk of developing a bump or asymmetry after surgery is low. To reduce the risk of fat thrombosis, we follow international recommendations by injecting the fat only under the skin, performing movements during the injection and using special cannulas.

The Bellefontaine Clinic
is highly specialized

Lipofilling of the buttocks or lipostructure of the buttocks is one of the specialties of the Bellefontaine Clinic. Yann Favre, MD, performs several hundred liposuctions per year in Switzerland, with or without lipofilling. He specialises in gentle liposuction with the Bodyjet® waterjet. In order to achieve an optimal result and avoid contour irregularities, he takes sufficient time and performs several checks during the procedure in a standing position.